Get Mobile Solar this Summer in BC

Campers, Vans, RVs, Tiny Homes, and Pickup Trucks With the days getting longer and the snow (almost) gone in the Lower Mainland, it’s hard not to start planning this summer’s adventures.   For those who pack light, perhaps a headlamp is your only battery-hungry device.  But for those whose lifestyle involves living out of an […]

How Green is your Solar Energy?

Solar energy has a reputation of being clean and green.  But if you look beyond the marketing hype you will find that it is not always as “green” as it should be. In 2011 a spill from a Jinko Solar factory in China killed hundreds of fish and pigs that had been exposed to the […] 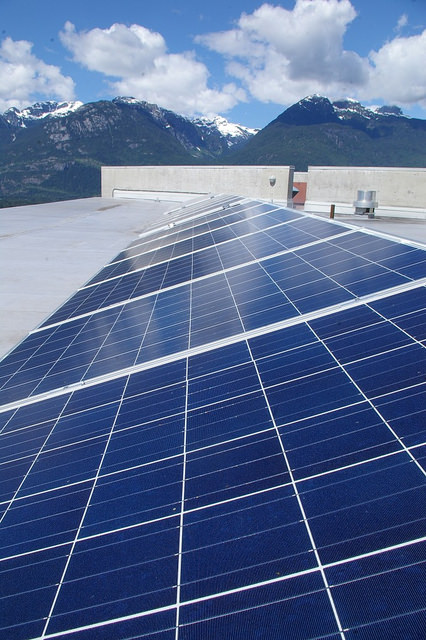 VREC recently installed a solar energy system at Quest University in Squamish just in time for the city officially becoming a Solar City. The 4.1 kW grid-tie system was a student lead project that is primarily designed for educational purposes. Production from the system can be viewed on-line. The system uses Trina modules and AP […]

How much energy can photovoltaics generate in Vancouver?

We are often asked how much solar energy can be generated in Vancouver from a nominal kW of photovoltiac modules.  Our best preforming system in the Lower Mainland is located in Richmond and generates 1,280 kWh / kW.  The owner of the system has not made the detailed data available online publicly.  But here is […]

Has Solar Energy Reached a Tipping Point in BC?

Eleven years ago we became the first contractor to install a grid-tie solar energy system in Vancouver (and as far as we know, the first one in BC).  Over the decade since then, we have installed a range of residential, commercial and institutional systems. However, we have never seen a year like 2015. This year […]

Vancouver’s winter Bike to Work Week has wrapped up for another year, and once again VREC has dominated our industry sector.  Actually, it appears that VREC was the only solar installer that participated in Bike to Work Week. VREC is committed to reducing fossil fuel consumption and other forms of pollution in all that we […]