This summer, VREC installed a new solar pool heater on the roof of the Slumber Lodge in Hope, BC.  Solar pool heaters have allowed for GHG-free 3-season pool use for decades. Water is simply circulated through hundreds of small rubberized tubes on the hot roof whenever the roof temperature exceeds that of the pool.  The basic idea hasn’t changed, but new components are changing the way we look at solar thermal projects.

How was this Hope installation different? The Slumber Lodge pool was a perfect example of how smart monitoring and control systems can greatly increase the utility of a solar pool system. Because the pool is indoors and used year-round, there is a natural gas furnace that provides heat when sunlight is in short supply. Before solar went in, the furnace would maintain a constant temperature in the pool, firing periodically to stay within a few degrees of the set temperature. 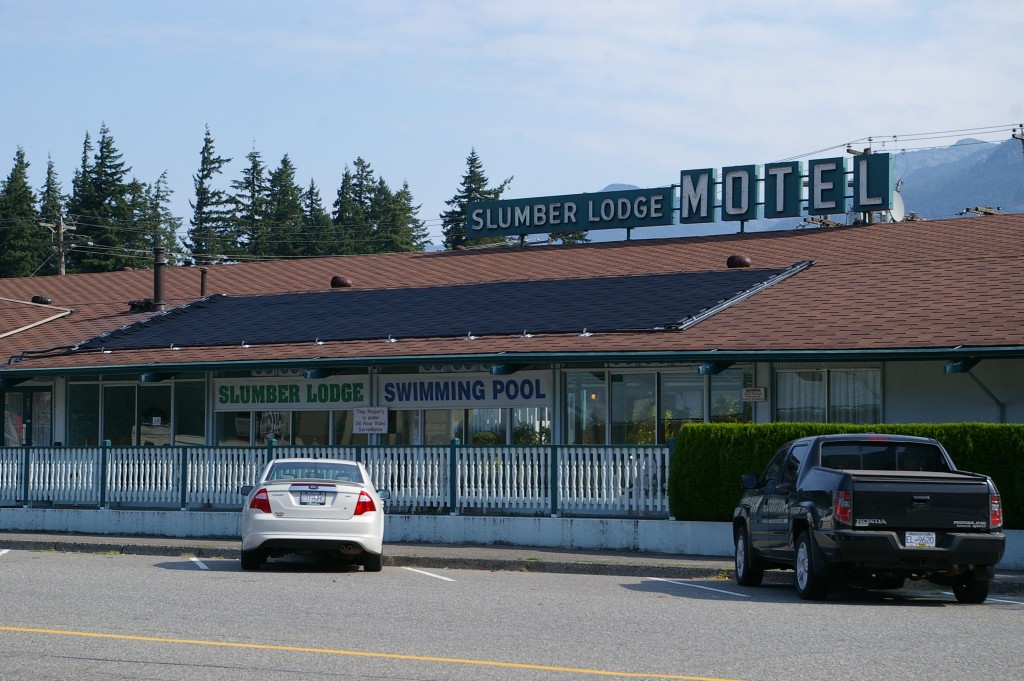 ADJUSTING TO SOLAR TIME
With the solar heater installed, the dynamics change. Instead of consistent short bursts of gas heat, we wanted to soak up every possible ray of sun before it dips back below the horizon. So rather than keep the same pool temperature all day long, we allowed the solar pool heater to increase its maximum temperature by a few degrees, and then cool off slowly through the evening and night.

To allow for these settings, we used a SwimPC, developed right in Burnaby by HotSun Industries, a solar pool heating manufacturer. The SwimPC acts as both controller and logbook of temperature and even water flow data. We settled on a fairly simple control scheme that allowed gas heating on cloudy days and on nights when the pool temperature got so low that the next day’s sun wouldn’t be able to re-heat it fast enough for  morning swimmers. On many nights, the high evening temperature would allow the pool to “coast” through the night and make it to morning without having to fire up the furnace at all.

Because it is a web-connected controller, the SwimPC has endless capabilities and is an example of the next step in solar thermal technology. For example, if forecast data is available that shows a sunny day coming up, that data can inform the gas heater that it doesn’t need to fire at 8 am, since the sun will have heated the pool sufficiently by the time it opens.

REDUCING THE GUESSWORK
Renewable energy systems, like fitness regimens and gardens, owe a great deal of their success to the end user’s behaviour and observation. Just as apps help people quantify their jogging miles, (& weight loss, caloric intake etc.), nuanced data is needed in order to tailor a solar pool system to a specific environment, and to recgnize and capitalize on gains in efficiency. With web-based monitoring, we as the installer can track temperature data in real time and tweak a system to work best for a client. What previously would require a series of cost-prohibitive site visits (with very little data resulting) can now be done thoroughly from our office in a matter of minutes.

The SwimPC monitoring/control system gives deatiled real-time and historical data about solar pool operation. It also allows for precise automation of the system to maximize its utility.

In the case of the Hope pool, we noticed that the cleaning schedule, which happened before the sun came up, required re-filling, which added cool water to the pool. This prompted the gas heater to come on for a full 1/2 hour or more.  From that we were able to suggest a mid-day cleaning schedule so that solar heat would take careof any temperature drop. This small change alone would save roughly $1.50/day.  It doesn’t sound like much, but over a summer that amounts to $135, on top of the general savings from using solar.

As well, if something as simple as a tree limb or fallen pine needles begin to shade out the sun, the data will reflect this, and we can suggest trimming or cleaning.

MONITORING IN PV & ELSEWHERE
Microinverters have offered this same type of detailed web-based monitoring for the photovoltaic energy industry for some time now, allowing installer, manufacturer, and client to monitor performance on a per-module basis, with alerts sent automatically in the case that something unusual occurs.  Solar domestic hot water has similar capabilities

Whether solar thermal or electricity, detailed and user-friendly monitoring systems not only allow for greater efficiency measures, but they reduce the amount of roof-time needed, saving time, shingles, and increasing the safety of the industry as a whole.  Even without renewable options, smart technologies like programmable thermostats greatly reduce unnecessary energy use.  When coupled with renewables, they present a vast range of benefits that save money and slow the need for large-scale energy development across the province.