VREC recently received an email from Robin Hanvelt, a customer whose garage and house are now proudly bearing 21 solar photovoltaic panels. In most industries, no news is good news once a project is finished. So when an email popped up from Robin with the subject, “Should I expect this type of peak power in early February?,” it sounded as if his enthusiasm for PV production was being tested by the short days and low-angle sun.
Instead, it seems his home system, which is grid-tied (selling excess electricity to the grid, and drawing on it in dark hours) was frequently producing more electricity than it was using. The net effect? The Hanvelts’ BC Hydro bill since September was less than half of what it would have been previous to going solar. 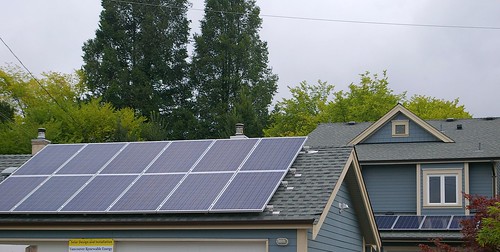 “If in the winter months, I am selling approximately half my production to BC Hydro and presumably in the April thru September period the array will produce significantly more power each day with an increased surplus going to Hydro, the net-billing may produce a very favourable economic exchange. This is going to be a very interesting year.”
The Hanvelts are now considering installing an additional 8 PV panels and purchasing an electric vehicle that would charge off of their grid-tied system. Since September, their system has produced over 2.5 megawatt hours, or the equivalent energy of 400 litres of gasoline.
While solar energy systems (electric, hot water, hot air) reach their peak performance in direct overhead sun conditions, ambient sunlight on an overcast day will still translate into usable energy for the consumer. When coupled with smart energy consumption, homes in BC have the potential to be net producers of energy when averaged out over the course of a year. While these systems require an up-front investment, they begin their payback immediately, and with no moving parts, they’re relatively hassle-free.