On August 31 Vancouver Renewable Energy (VREC) staff returned from Pond Inlet, NU, after installing a 9.3 kW photovoltaic system on the hamlet’s Community Hall. Three weeks later, as of September 20, the installation of 32 290-Watt panels has offset 590 kWh of electrical consumption, equal to $577 savings on the municipal power bill. This is the most northern grid-tied solar energy system in the Americas.

In addition to solar, the installation will be paired with a mural celebrating light, both from the sun and from qulliqs, traditional Inuit lamps that use animal fat as for fuel. Ikaarvik Youth Researcher Alex Anaviapik is designing the mural with input from the community and will paint it once warm weather returns next summer. 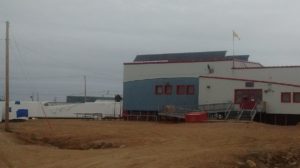 The project was made possible after a group of the Ikaarvik Youth Researchers in Pond Inlet conceived the idea for community solar and applied for funding for the install and in-kind donations to help with transportation and logistics. A research icebreaker contracted by the Arctic Kingdom tour company delivered the panels and racking, which saved immensely on shipping costs.

Shelly Elverum, Northern Coordinator for the Ikaarvik Project, summed up the entire effort, remarking, “These young people were innovative, they were resourceful, and they were doing something for the benefit of the environment, just like their elders would want them to.”

Lawrence Keyte is Team Lead of Clean Energy and Infrastructure with Polar Knowledge Canada, a major funder for the project. He met with the Ikaarvik Youth in September of 2016. “Of the many science and clean tech projects we discussed, the Ikaarvik group kept coming back to the idea of a solar array on the community hall.  They saw it as a symbol of the community’s interest in a cleaner and more sustainable energy future.” In a statement delivered to the Hamlet for their solar completion celebration, Polar Knowledge recognized that “it combines Inuit Knowledge with local art and renewable energy.” 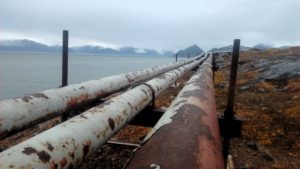 Pond Inlet, a remote hamlet of about 1500 which sits at 72 degrees north latitude, relies on fossil fuels for all of its electrical and heating needs. A diesel tank farm and generator plant distribute stable electrical current onto a power grid that otherwise resembles that of most Canadian communities. While diesel, shipped up on a tanker each summer, is still the primary energy source for the Community Hall and all other buildings, the photovoltaic panels allow the Community Hall to draw less diesel power throughout the Arctic summer, thus saving significantly on their high energy bills. An upcoming net metering structure in Nunavut will allow extra electricity generated to be “sold” back to the utility, QEC, for a credit. The Community Hall and attached arena have significant baseline electrical loads, however, so they would rarely have excess power to sell back. This system allows all power generated to be used without the need for costly batteries. 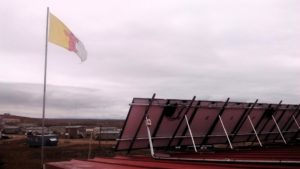 Public monitoring of the Community Hall’s solar production can be viewed here .  The system is expected to reduce greenhouse gas emissions by over 8 tonnes and save $9,000 in electricity costs each year.