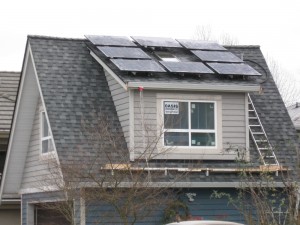 VREC helped facilitate the installation of the first solar photovoltaic (electric) grid-tie system in the city of New Westminster.

Most of BC is serviced by BC Hydro.  BC Hydro has allowed solar photovoltaic connections to its grid for seven years now.  But the City of New Westminster has it’s own utility which did not have a formal policy for connecting solar energy systems to the grid.

Our customer and his electrician did most of the installation.   We supplied all the equipment (including the Day4 Energy panels) and provided consulting services to help them finish the install.  After reviewing the installation the City of New West decided to allow the connection to the grid.