Can I sell excess power to BC Hydro? Are there any grants or incentives?

Since 2004 BC Hydro has allowed renewable energy systems to connect directly to the grid, allowing you to “sell” surplus power to the grid.  The BC Hydro program is called Net-Metering. The historical energy credit for annual excess power that BC Hydro has offered is shown below. VREC has installed the first such systems in Vancouver and North Vancouver. We also have experience arranging for permits and grid interconnection in municipalities that are unfamiliar with photovoltaics. 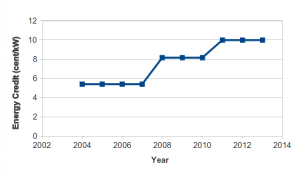 The BC LiveSmart grant for photovoltaic systems ended in 2014.